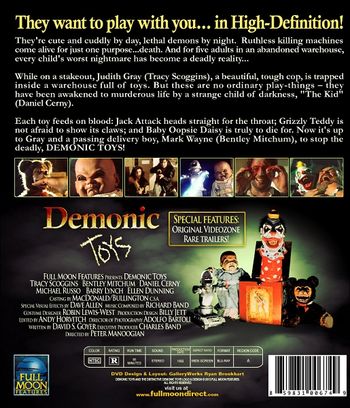 Demonic Toys is coming to Blu-ray for the first time and has been remastered with AMAZING Widescreen color correction, 5.1 surround sound, and an incredible amount of extras:

They're cute and cuddly by day, lethal demons by night. Ruthless killing machines come alive for just one purpose...death. And for five adults in an abandoned warehouse, every child's worst nightmare has become a deadly reality...

While on a stakeout, Judith Gray (Tracy Scoggins), a beautiful, tough cop, is trapped inside a warehouse full of toys. But these are no ordinary playthings – they have been awakened to murderous life by a strange child of darkness, "The Kid" (Daniel Cerny).

Each toy feeds on blood: Jack Attack heads straight for the throat, Grizzly Teddy is not afraid to show its claws, and Baby Oopsie Daisy is truly to die for. Now it's up to Gray and a passing delivery boy, Mark Wayne (Bentley Mitchum), to stop the deadly, DEMONIC TOYS!