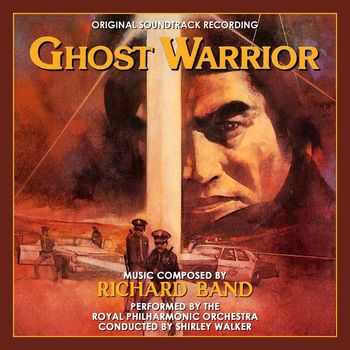 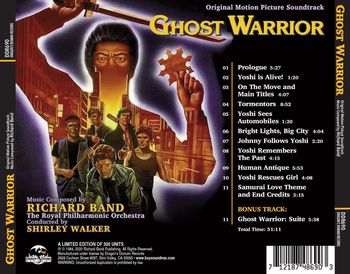 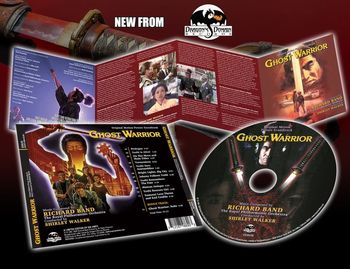 Released in 1984, GHOST WARRIOR tells the story of Yoshimitsu, a renowned samurai in 16th Century Japan, who is wounded in a swordfight while trying to protect his wife from brigands. Yoshimitsu falls into an icy lake where he is quickly frozen. 432 years later his corpse is discovered in an ice cave and turned over to scientists in Los Angeles, who are hired to conduct an autopsy of the body. The team is led by Dr. Richards, who decides to try and revive the ancient corpse instead. Remarkably, the procedure is successful but Yoshi escapes when disturbed by a greedy security guard who tries to steal and pawn his katana sword. Fighting his way from the suburbs to downtown L.A., Yoshimitsu for all his mastery of swordplay and perception of Japanese culture circa 1552 is unable to comprehend 20th Century America, and can only defend himself at swordpoint after he runs afoul of a local street gang and, ultimately, the LAPD, leading to a tragic conclusion.

The score for GHOST WARRIOR is a fusion of symphonic orchestral music, ethnic Japanese flutes and percussion, and an array of unusual percussion instruments invented and constructed by early 20th Century American composer Harry Partch (1901-1974). When Band got the assignment to score GHOST WARRIOR, he realized there was an opportunity to achieve something distinctive by combining ethnic Japanese instruments with the unique and versatile instruments of Partch. Band did some research on Partch’s instruments at the UCLA library. His first challenge was in figuring out how to communicate to musicians playing these instruments who are used to reading normal sheet music. At the same time, Band discovered that the top percussion player in Los Angeles, Emil Richards, had been Partch’s main disciple and had inherited all of Partch’s instruments. The Harry Partch percussion instruments were recorded in Hollywood at Group IV, a recording studio that no longer exists. The orchestral portions of the score were later performed by the Royal Philharmonic Orchestra, conducted by Shirley Walker, who may have been the first woman to conduct the Royal Philharmonic for a film session. The end result is an expansive orchestral score that merges extremely unique percussive sounds with a richly symphonic melody structure accentuated by ethnic Japanese instruments.

Dragon’s Domain Records is excited to bring the soundtrack to GHOST WARRIOR back to the marketplace with the music freshly remixed by Matt LaPoint from the score’s original 8-track masters, which the composer was only recently able to find, digitally remastered by James Nelson at Digital Outland, including liner notes written by author Randall Larson, with the participation of the composer.