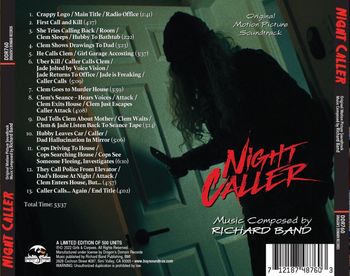 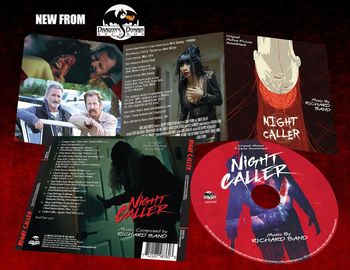 NIGHT CALLER focuses on a psychic hotline worked named Clementine (Priver), who starts receiving calls from a serial killer. The killer, James Smith, as it appears on the caller ID, loves to taunt Clementine on the phone before each murder. Soon after, Clementine begins to have visions of the grizzly deaths before he commits them. Predicting his murders before he commits them puts her into a terrifying game of cat and mouse with the killer. Enlisting the aid of her invalid father and clairvoyant co-worker, they must use their unique abilities to stay one step ahead of a maniac whose unspeakable acts in the present are nothing compared to his past and future.

Continuing their successful collaboration on EXORCISM AT 60,000 FEET and THE DEEP ONES, director Chad Ferrin returned to Richard Band to score NIGHT CALLER. “Not only has Richard created my favorite score of our three collaborations, but he did it with tremendous speed and accuracy, a testament to his tremendous talent, as well as our developing shorthand”, the director said recently.

Richard Band was born in Los Angeles on December 28, 1953. He is the son of film producer-director-writer Albert Band, brother to producer-distributor Charles Band and uncle to young rock star Alex Band of the rock group ‘The Calling’. Shortly after his brother Charles had formed his first movie company, Richard decided to take a break from music and began to work as an assistant director on some of his films. He then went from assistant director to production manager, to associate producer and finally producer on over 13 films.

As a composer, his work is extremely prolific and he has consistently evolved with the ever-changing needs and tastes of the entertainment industry. He has worked on over 140 film and TV projects and has had his works recorded with some of the most renowned orchestras in the world including the London Symphony Orchestra, the Royal Philharmonic Orchestra and the Rome Symphony Orchestra.

In addition to being a composer, Richard finds time to educate and mentor aspiring composers and musicians in all areas related to composition, the music industry and music production process. His knowledge and experience in film music, mastering, album producing, and intellectual property rights has proven to be invaluable to many.

Dragon’s Domain Records presents the original motion picture soundtrack to NIGHT CALLER, mastered by James Nelson at Digital Outland. NIGHT CALLER is a limited edition release of 500 units. NIGHT CALLER is expected to begin shipping the week of May 4th, 2022. The first 50 copies of NIGHT CALLER ordered trough the buysoundtrax.com website will be autographed by the composer at no extra charge.