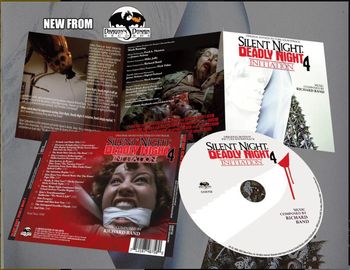 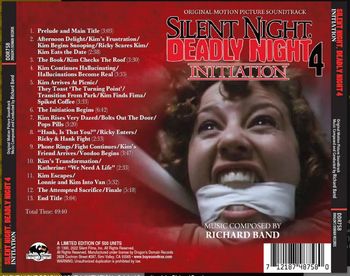 SILENT NIGHT, DEADLY NIGHT 4: INITIATION is the third sequel to the original SILENT NIGHT, DEADLY NIGHT, which was released in 1984. The plot revolvedaround a young boy named Billy Chapman whose parents were brutally murdered by a drunken dime-store Santa Claus on the way home from visiting Billy’s grandfather. The orphaned boy lives out his childhood raised by Catholic nuns who continue to foster his fear of Santa Claus. Eventually teenage Billy snaps, dresses up as Santa Claus, and begins slaughtering people during the Christmas season.

SILENT NIGHT, DEADLY NIGHT 4: INITIATION was released on home video in 1990. Abandoning all previous characters and plot points from the previous three films, INITIATION tells the story of Kim Levitt (Hunter), an aspiring journalist who writes for an LA newspaper as a classified ads editor. Her boss Eli (Bannister) seems to favor and promote only her male co-workers. When a woman shows up burnt to a crisp on the sidewalk, Kim decides to pursue the story without her boss’s approval. Through her investigations, Kim is kidnapped by Ricky (Howard). Ricky and his coven of witches perform a secret ritual on Kim. Eventually, Kim escapes with Ricky in pursuit who tries to prevent her from uncovering all of their murder-cult exploitations.

The music for SILENT NIGHT, DEADLY NIGHT 4 was composed by Richard Band. His all-synth underscore is particularly unique for a Christmas horror film. In all honesty, the Christmas elements in the film are an afterthought and not a major catalyst in the inspiration behind the music. Band infuses his music with heaping helpings of percussion and include the use of the waterharp, a bowed metallic object sporting long tines with water in its base, which perfectly evoke the rituals and indoctrinations of an ancient cult.

Richard Band was born in Los Angeles on December 28, 1953. He is the son of film producer-director-writer Albert Band, brother to producer-distributor Charles Band and uncle to young rock star Alex Band of the rock group ‘The Calling’. Shortly after his brother Charles had formed his first movie company, Richard decided to take a break from music and began to work as an assistant director on some of his films. He then went from assistant director to production manager, to associate producer and finally producer on over 13 films.

As a composer, his work is extremely prolific and he has consistently evolved with the ever-changing needs and tastes of the entertainment industry. He has worked on over 140 film and TV projects and has had his works recorded with some of the most renowned orchestras in the world including the London Symphony Orchestra, the Royal Philharmonic Orchestra and the Rome Symphony Orchestra.

In addition to being a composer, Richard finds time to educate and mentor aspiring composers and musicians in all areas related to composition, the music industry and music production process. His knowledge and experience in film music, mastering, album producing, and intellectual property rights has proven to be invaluable to many.