The Deep Ones - Complete Score (CD) 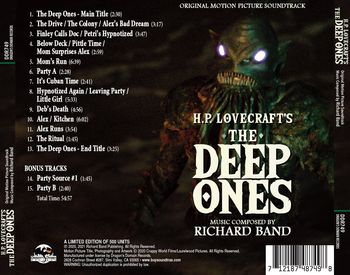 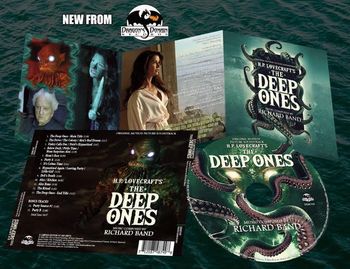 The Deep Ones (Dragon's Domain)

Dragon’s Domain Records presents the original motion picture soundrack release of THE DEEP ONES, to be distributed through buysoundtrax.com. THE DEEP ONES features music composed by Richard Band for the 2020 horror film directed by Chad Ferrin, based on the writings of H.P. Lovecraft and starring Gina La Plana, Robert Miano, Johann Urb, Silvia Spross, Jackie Debatin, Kellie Maroney and Nicolas Coster.

After suffering an untimely loss, Alex (La Piana) and her husband Petri (Urb) visit California for a much-needed break from reality. At an unassuming AirBnB rental near Ventura Beach, they meet the mysterious Russell Marsh (Miano). Marsh introduces them to the oddly enthusiastic locals, fixes them a lavish meal and invites them out on his luxury boat. Little do they know that beneath Mr. Marsh’s thin veneer of avuncular charm lurks a dark devotion to an archaic evil.

After a successful collaboration on the horror comedy EXORCISM AT 60,000 FEET in 2019, director Chad Ferrin knew there was only person to score THE DEEP ONES. Only one composer holds the record for scoring the most H.P. Lovecraft projects and it’s Richard Band, which includes his music for RE-ANIMATOR, FROM BEYOND, THE RESURRECTED and a memorable episode of MASTERS OF HORROR.