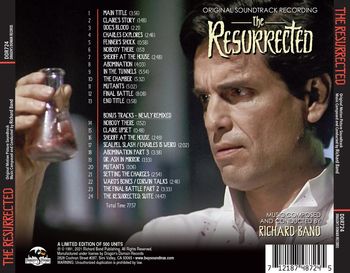 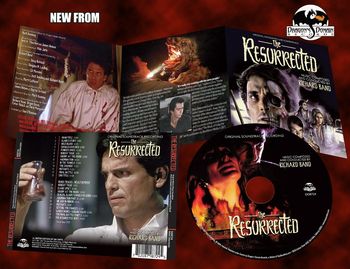 Based on H.P. Lovecraft’s classic story ‘The Case Of Charles Dexter Ward’, THE RESURRECTED begins with Claire, the wife of chemist Charles Dexter Ward hiring a private investigator, John Marsh, to gather information on her husband, who has started living like a recluse in a remote cabin owned by his family for centuries. Ward is a chemist for Belmar Cosmetics and has been spending more and more time away from home lately. Marsh immediately suspects that Ward is having an affair with his secretary but as he gets more involved with the case, he discovers that Ward has a lab partner named Ash and there is definitely something strange going in Ward’s laboratory.

Richard has composed the music for more than 10 interactive computer/video games over the years and has had many soundtracks that have been released of his film works. Richard has also scored many documentaries including the award-winning series’ MOST DECORATED, BRUTE FORCE and WEAPONS OF WAR and has also contributed much music to other series’ like THE REAL WEST, CIVIL WAR JOURNALS and BIOGRAPHIES. His experience over the years has brought him to record over 22 film scores with internationally renowned orchestras such as THE ROYAL PHILHARMONIC ORCHESTRA, THE LONDON SYMPHONY and THE ROME PHILHARMONIC. He has also had his music recorded in Prague, Romania, Croatia and Munich. In more recent years, Richard has also enjoyed scoring a variety of family and comedy films for Viacom and Paramount Pictures as well as hundreds of animated vignettes for the WB kid's network all of which were scored with orchestra. His musical talents can also be heard on several  amusement park rides including ALIENS - THE RIDE as well as several Vegas venues. Among the many interactive games Richard has scored the music for STAR TREK, WATERWORLD, CASPER, STONEKEEP, DECENT UNDER MOUNTAIN, CLAYFIGHTER and INVICTUS: THE SHADOW OF OLYMPUS.

For this new presentation of Richard Band’s THE RESURRECTED, Dragon’s Domain Records has remastered the original album program released in 1992, thanks to James Nelson at Digital Outland and also includes a selection of bonus tracks that include the remixed orchestral selections from the score courtesy of engineer Matt LaPointe,with liner notes written by author and composer Brian Satterwhite, with the participation of the composer.

THE RESURRECTED is a limited edition release of 500 units. THE RESURRECTED is expected to begin shipping the week of June 7th, 2021. The first 100 copies ordered through the buysoundtrax.com website will be autographed by the composer at no extra charge.